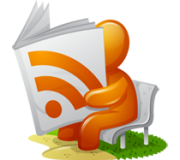 As you may know, Google announced

that starting from 1 July 2013 it will decommission its famous product – Google Reader. It was a web based application that was widely used for reading news, blogs and articles since 2005.
The question is, how to keep all RSS

feeds you are subscribed to, without manually adding them one by one to another RSS reader.

(or OPML) file and to import this file into other RSS readers.

The aim of this article is to provide a couple of available solutions which are decent replacement for Google Reader, but also which are web based and free to use. And last but not least, to be able to automatically fetch all feeds from Google Reader.

Here is the list of most popular Google Reader replacements available as web-based apps:

– very beautiful layout with a reading experience very similar to Google Reader. Comes as Chrome app. Also it is available for iPhone, iPad and Android devices. It imports feeds from Google Reader with a click of a button and it is very fast. I personally like and use this app. It is completely free and there are no limitations. – RSS reader available as Web, iPad, iPhone and Android version. The free version gives up to 64 sites. It can import the feeds from Google Reader. It is able to integrate RSS feeds with your Facebook and Twitter accounts.

– web based solution which can fully synchronize the feeds from Google Reader. It offers content filters which gives you possibility to separate the feeds from Facebook and Twitter accounts. – the basic version comes as an extension for Chrome

and Safari. It can sync with Google Reader. The free version is not available for mobile users.